Inside the meat lab: the future
of food

With billions of mouths to feed, we can’t go on producing food
in the traditional way. Scientists are coming up with novel ways
to cater for future generations. In-vitro burger, anyone? 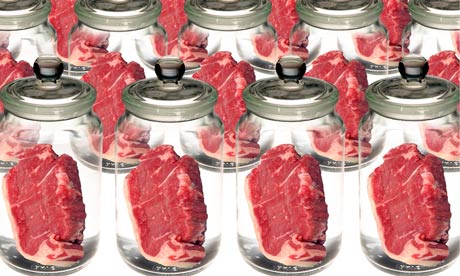 Dish of the day: breeding and mutating food species may
be the only convincing plan anyone has for feeding the
world Photograph: Victor de Schwanberg/Science Photo
Library
The future feast is laid out around a cool white room at
Eindhoven’s University
of Technology . There is a steak tartare of in-vitro
beef fibre, wittily knitted into the word "meat". There are
"fruit-meat" amuse-gueules. The green- and pink-striped
sushi comes from a genetically modified vegetarian fish
called the

biccio that, usefully, has green- and pink-striped
flesh. To wash this down, there’s a programmable red wine:
with a microwave pulse you can turn it into anything from
Montepulciano to a Syrah. For the kids, there are sweet
fried crickets, programmable colas and "magic meatballs".
These are made from animal-friendly artificial meat grown
from stem cells: packed with

Omega 3 and vitamins, they "crackle in your mouth". Yum.

None of this is quite ready to dish up. The meatballs at the
Eindhoven future food show are made from Plasticine; the
knitted steak, appropriately, from pinky-red wool. But the
ideas aren’t fantasy.
Koert van Mensvoort, assistant professor at the
university, calls them "nearly possible". Van Mensvoort –
who is also the brains behind
nextnature.net,
a must-see website for technological neophiliacs – put his
industrial design undergraduates together with bio-tech
engineers, marketing specialists and a moral philosopher,
tasking them to come up with samples of food that is,
technologically, already on our doorstep.

The truth, though, is that artificial steak is still a
way off. Pizza toppings are closer. The star of the Dutch
research into in-vitro meat,
Dr Mark
Post, promised that the first artificial hamburger, made
from 10bn lab-grown cells, would be ready for
"flame-grilling by Heston Blumenthal" by the end of 2012. At
the time of writing it is still on the back burner. Post
(who previously produced valves for heart surgery) and other
Dutch scientists are currently working over the problem of
how to turn the "meat" from pieces of jelly into something
acceptably structured: an old-fashioned muscle. Electric
shocks may be the answer. 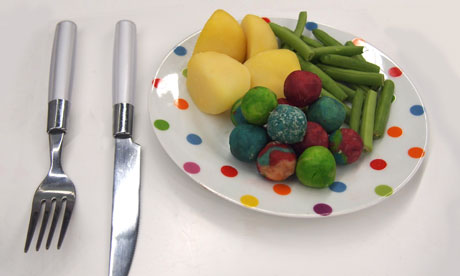 This quest is key to the future of food. It’s not what
can be done but what we will accept. Some scientists warn
that trying to copy the meats humans are used to is futile –
another symptom of our ignorant and unsustainable nostalgia
about food. "It’s simplistic to say ‘natural is good’, to
reject globalisation and hark back to a mythical past when
food was still ‘true and honest’," says the Dutch
intellectual

Louise Fresco, a former head of food- innovation
research and an advisor to the UN.

"It’s the default thing to do, to try and replicate what
you know," warns van Mensvoort. "It’s not how you innovate.
We started with horseless carriages, but in the end what we
got was cars. ‘Natural’ is the biggest marketing scam, and
the most successful, of all."

The technological problems of producing the new hi-tech
foods are nothing compared to the trouble the industry is
having with the consumers – the "yuck factor", as the food
technology scientists across the world like to put it.
Shoppers’ squeamishness has turned the food corporations,
from whom the real money for R&D will have to come, very
wary, and super-secretive about their work on GM in America.
There’s energy behind these projects because of the
certainty that 9 billion human beings cannot possibly go on
eating food, especially meat, produced in the traditional
way. The planet can’t take it. Dutch food companies need to
cater to a population that eats more pork than any other in
Europe, but they do not publicly fund Koert van Mensvoort’s
work at Eindhoven, or any of the artificial-meat research.
That’s done by the Dutch government.

Van Mensvoort is contemptuous of the food corporations’
nervousness, especially when so much is at stake, pointing
out that "if the industry sees a word like ‘pharmaceutical
sushi’ they say, ‘You can’t put our name near that!’ They’re
afraid." I have first-hand experience of this: at a
scientific conference on food and nano-technology
(engineering at sub-molecular level) an executive from
Europe’s biggest food company begged me not to print the
fact that he was there.

It’s all
Monsanto‘s fault. "It was a historic mistake that GMO
started with herbicides, and that the US government gave the
corporations the freedom to introduce them," says Professor
Fresco, who wants to feed not just the rich, but the hungry
all across a future world of 9 billion people. Monsanto, the
Dr Frankenstein of our time, certainly generated appalling
publicity around its callous and careless marketing of GM
pesticides in the United States and in India. The public’s
subsequent collapse of faith in bio-tech science, says
Fresco, has not just put the brakes on new foods for the
rich world. It’s also damaging the fight to end hunger.
Hundreds of millions of Africans who depend on an unreliable
staple, such as cassava, are deprived of the technology that
could make it disease- and pest-resistant. GM rice could
raise productivity by 40%.

"African scientists say, ‘Don’t you dare bar us from this
technology,’" says Fresco. There are risks, she agrees, but
she believes we’re better able to monitor them than ever
before. Though the scientists in Holland avoid the term GM,
the quiet consensus is that the technology is coming, the
world needs it and that Europe needs to get real about it or
be left behind.

Cor van der Weele, Professor of Humanistic Philosophy at
Wageningen University, is convinced that’s the case, with
artificial meat at least. "People will see the moral
benefits of cultured meats. Taking stem cells from a pig
rather than killing millions of pigs in factories is already
a more attractive idea to consumers." She quotes studies of
the viability of growing meat in sunlight-fuelled
"bio-reactors" placed in desert areas: the reduction in
resources is staggering. "It would require 1% of the land
and just 2% of the water that traditional meat production
does. And it would involve a 90% reduction in greenhouse
gases," she says.

Eating real meat in 2035 could be as morally questionable
as eating foie gras – and about as expensive. As Dr Mark
Post says: "A meat-eater with a bicycle is much more
environmentally unfriendly than a vegetarian with a Hummer."

All we know for sure is that future meals are going to be
more expensive, and won’t come in a pill. That job is
technically impossible: even the Pentagon’s battlefield R&D
department has given up trying to cram 2,000 calories into
one capsule (it would weigh about half a pound). Besides, we
like eating. And though the food industry is brilliant at
selling us things we don’t need, the customer is still king. 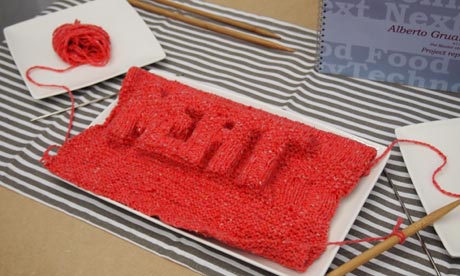 This steak is a bit… stringy. An example of ‘nearly
possible’ fantasy food. Photograph: Observer

Our desires in food are laden with paradox. We love
novelty, but are transfixed by nostalgia and tradition. We
want to pay less while getting ever better quality. We want
natural and healthy, though the two are not necessarily the
same. We want to eat better than previous generations, but
we revere what those generations ate. Nostalgia, neophilia,
hypochondria and snobbery drive the hunter-gatherer today,
all sauced with deep scepticism about science, supermarkets
and the dark machinations of the "food-industrial complex".

None of that seems likely to change over the next 25
years. But what will is the supply of food – more radically
than at any time during the 20th century. Climate change and
the end of the era of cheap fossil fuels for transport and
fertiliser are altering the food system. The world’s three
most important food crops – rice, wheat and maize – are
largely grown in the countries most at risk from rising
temperatures, and the predictions are stark. Maize, for a
start, can’t be grown above 30C.

All food futurologists agree we can’t go on eating the
way we have. But though the organic lobby is convinced that
back to basics could solve the world’s problems, no serious
scientist believes traditional farming alone will work. And
so we will have to accept the new and "unnatural" if we want
to stay fed. The public already accepts many things as
natural that are not – from the bacteria-generated slime
that gives bulk to low-fat mayonnaise to the chemicals that
taste more real than the real thing (have a look at the
label next time you buy "truffle oil").

Author Josh
Schonwald has found US bio-tech researchers are already
far ahead with the nutrition of the future. As he reveals in
his book,

The Food of Tomorrow, the labs at the
University of
California-Davis are gene-splicing to create "grapes
spiked with jellyfish, tomatoes spiked with carp…" and
lettuce that will last on the shelf for weeks. There may
already be pigs genetically engineered to grow up to five
times faster. Notoriously – it was the subject of a

Greenpeace campaign – there is a tomato made to last
longer by using Arctic flounder genes, while in

Israel a lemon basil plant crossed with a tomato has
tested well with consumers.

In Schonwald’s view, all that the industry awaits is a
relaxation of government regulation that will make
development of these foods financially feasible. In the
course of writing his book, Schonwald was converted. He
began as a technosceptic: now he reckons that categorical
rejection of GM is "reckless, dangerous and inhumane". It’s
the promise of adapting crops to get essential vitamins to
millions of the poorest children that sold GM to him.

But, historically, hi-tech seems to let down the poor.
Chemical fertiliser and pesticide has created dependency and
pollution. Medical breakthroughs are for the rich world:
drug companies spend more researching erectile dysfunction
than they do malaria. But breeding and mutating food
species, whether in a lab or on the farm, is the only
convincing plan anyone has for feeding the whole world.

Something has to give in our present food culture. It
doesn’t seem possible that food can ever be as cheap again
as it was circa the year 2000. In Western Europe we now
spend between 10% and 15% of household income on food – 60
years ago it was 60%.

Tim Lang, Professor of Food Policy at London’s City
University, says cheap food has been unrealistic, because at
the moment we don’t actually pay its real price: "We’ve
externalised the costs on to the environment, far-off places
and cheap labour throughout food chains."

Population growth alone is going to push up the price of
grain; the
UN’s Food and Agriculture Organisation reckons the
planet will need to produce 40% more by 2050, while climate
change is already affecting the great bread-baskets of the
world. Lang has told the UK government that the
oil-dependent food culture is over and that trading
bio-diversity for food justice "will lead to Armageddon".
When the future food arrives, most of us won’t have any
choice about what we eat.